I had been saving this for an eventual review I was writing up, but in honor of it being Valentine’s Day, a day for couples to show their affection to one another, I thought I’d share it.  Below is a photograph of my grandparents, that I’ve scanned and cleaned up in the top version, and attempted to colorize in the bottom version.  When I originally asked my Granddad about it, he guessed that the photo was taken at a photo booth in Brodhead, Ky at the Little World’s Fair.  The date isn’t clear when it could have been, but it was before they were married in ‘53. (Assuming on my part by lack of any form of rings)

To this day their still married and two people that I strive to make proud, professionally and personally.  I don’t have the original picture, I gave that back, but I do cherish that I have this, as a reminder, and as of proof that love between two people can stand the tests of time. 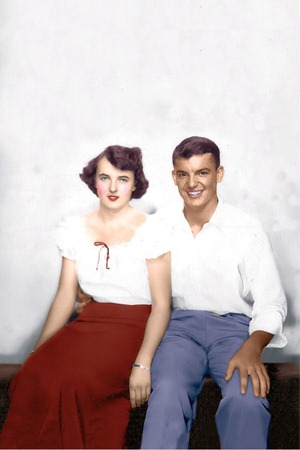 Last night, a Lexington Police officer was killed in the line of duty by a hit and run while he was investigating a call.  He was 27 and a father.  Its a sad and tragic story that has been on the news all morning. [news article]  Even though I had already processed the story, thought about how selfless those men and women are, swallowed the distaste for the coward of a man who did this, nothing struck me more profoundly and brought me to such soul searching until I saw this on facebook posted by Kristen Pflum, a reporter for LEX 18.

Reading this caused my heart to sink, something I even acknowledged with a comment on this status saying as much.  Its hard to believe that sometimes I do forget how much I wanted to be a Dad.  Its one of the reasons I never fought to save my first marriage, something I’ve never admitted to until now, on this rarely read blog.  We were in two different places in life, and maybe it was selfish of me, but I wanted kids, I knew I did, I wanted to be a Dad so bad, to be able to feel that love, and when she said she didn’t, it changed my whole perspective, it changed everything for me in regards to her.

Then when Canaan came around, so many grey clouds and questions with that, its hard to imagine it could have been any more of a mess.  I don’t hide the fact that I regret not having the chance to be involved more when he was first born, even more so as I have watched Abby grow, but I don’t regret fighting and being determined to be a part of my son’s life.  All the times I cried and was upset, fighting and struggling with his mom, thinking that it would be easier to not be involved.  My heart would never let me do that, I might have thought it at my lowest points, but I don’t regret ever making the decisions I’ve made, I question them sure.  What little I am able to be involved in his life right now, of course I question if the little he gets to see me is actually a good thing for him or if it just confuses him and makes some things worse.  Why wouldn’t I?  He’s my son, I want the best for him, and even though it might hurt me, I want him happy, and I seriously question if I’m selfish sometimes when it comes to wanting to be his father more then I am now.  He has grown every time I’ve picked him up, he breaks my heart every time he asks when he gets to go back to his mom, or not telling me he loves me, or cries when I come to pick him up, but I would never change the fact that I’m his father.  I never for even a moment not want to be his Daddy.

And even though he’s my first, and I have Katlyn, who for someone that doesn’t share an ounce of blood with me will end up being like me more then my two biological kids, and challenges me as a parent and a person everyday, and I love her with everything in me, my heart is with my Bug.  I have 3 kids, and I’ve only got to be around 1 during their first year, to watch them grow, get teeth, try to walk to say Daddy, to yell DaDa, to just mumble it, partially because that’s all she can say.  To hear them cry and laugh to watch her struggle with something new, and see the determination in her beautiful blue eyes.  She has been everything I wanted and looked forward to in regards to being a parent.  And if anyone that reads this, thinks I’m putting Canaan and Katlyn down, or saying they’re less of anything, I’m not.  I’d do anything for any of my kids.  My kids are my heart and my life.  I would probably surprise people how many times a week I sit and wonder if I’m doing the right thing, if I’m a good or a bad parent.  I have a lot of alone time, a lot of driving, and they’re always a constant thought.  Wondering how I can connect more with Katlyn as she gets older and I more and more become “Dad”.  How I can connect more with Canaan in terms of father and son, something I feel I fail at because of what little time I have.  They’re both a challenge and heartbreak for me because I do feel I let them down.  Abby is just the better reminder of why I wanted to be a parent, why I looked forward to it and what makes me so determined to be a good parent, a good man and roll model for all three.  I’d do anything for them, and even though I have to get onto them, and their behavior drives me insane at times, I cherish ever single second and already wish I would rewind time, or free time in a single moment.  I feel guilty losing sight of that.  With all the stress and rushing that life gives me I could say its easy for me to forget the little things, but that’s shameful to when its the little things that drive me.  That get me to strive to be a better man.  To be someone they would be proud to call Dad.  The little things that are the most important in life are the same that are so easily taken for granted.  Little moments in their life as they grow, the joy in just one of their cheese tooth filled or joyful 3 tooth smiles, the satisfaction of accomplishing one of your life goals…and like being able to come home to the love of your children…

If you can’t tell by the rambling, my children are my life and soul.  Everything I’ve ever done and will ever do, is and will forever be for and about them.  I hate that such a horrible tragedy brought to light how selfish and unappreciative I’ve been of the little things lately.  I hate that a son will now grow up without his Dad because his Dad had it in him to be a great man.  I hate that a father won’t be able to throw a ball to his boy, or to be in the stand for his son to see as he stands out in a ball field.  To carry him on his shoulders, or to be there as a “man” the first time a girl breaks his heart.

In all the politics, stress, debt and struggle we go through as adults in everyday life, its scary we forget to cherish the little things that keep us going.  Something Brayden will never have to struggle with.

Today came the arrival of my first niece; Madelynn Kate.  Weighing 7lbs 10oz and 20 inches long, partially causing me to realize how small my Bug really was… 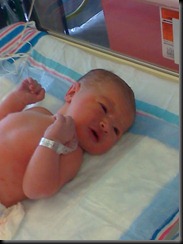 Fortunately I managed to be at the hospital when she arrived.  There was something almost surreal being at the same place I was 9 months ago, being where my brother was; in the delivery room and nursery.

So to do my very best at eventually winning the favorite uncle award.(a guy can dream!) I’ve been working on her nursery.  After Abby’s nursery, I’m more comfortable working in Madelynn’s, in a way that almost makes me feel guilty.  If I was allowed I’d probably go back and work on Abby’s some more, but I know better!!  LOL 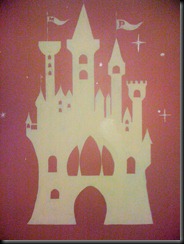 Showing progress from first night to second.  Including tweaking of the castle and towers, adding an additional flag and starting on the surrounding stars.  Still not happy with the overall look though.